I didn’t really know what to expect of Belgrade before I arrived other than what I had heard: “it’s the next Berlin” or “it’s up and coming.” A place with such a complicated past — years of being ruled by the Roman, Byzantine, Ottoman, Austrian empires (the city has been battled over in 115 wars and razed 44 times,) followed by years of ruling its neighboring countries with an iron fist during the Yugoslavian era. Would storied buildings reflecting its various rulers create a vibrant architectural melting pot or would remnants of its stark socialist past dominate? It’s both. 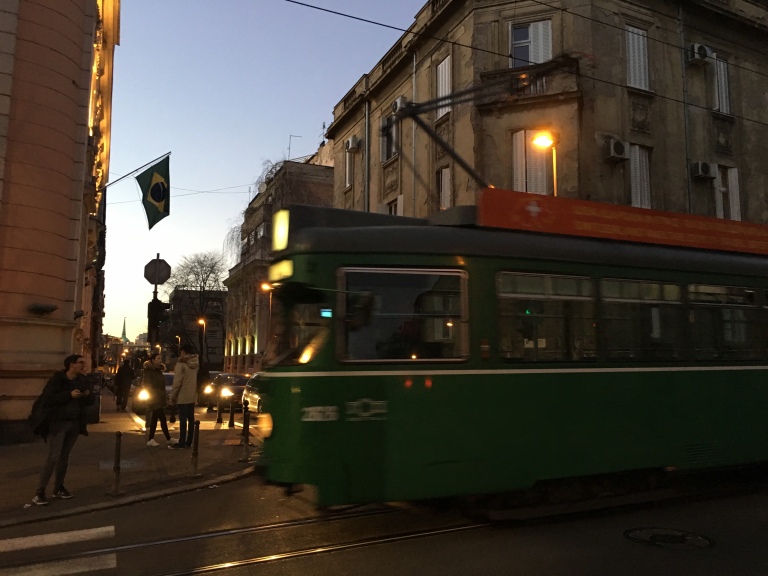 When we walked into our hotel, Square Nine, two things smacked us in the face immediately. One, you can still smoke indoors in Serbia and our hotel lobby welcomed us with a puff of cloudy air, and two, we could just as well be in the hippest London or New York hotel as we could be in Belgrade. The lobby bar was dimly lit, and decorated with James Bond-esque leather seats and glowing vintage globes with map demarkations from the Yugoslavian era. The cool factor far outweighed the cough factor — we were going to be spending a lot of time sipping old fashioneds and reading books in the evening here, regardless of smelling like a night in a college bar. 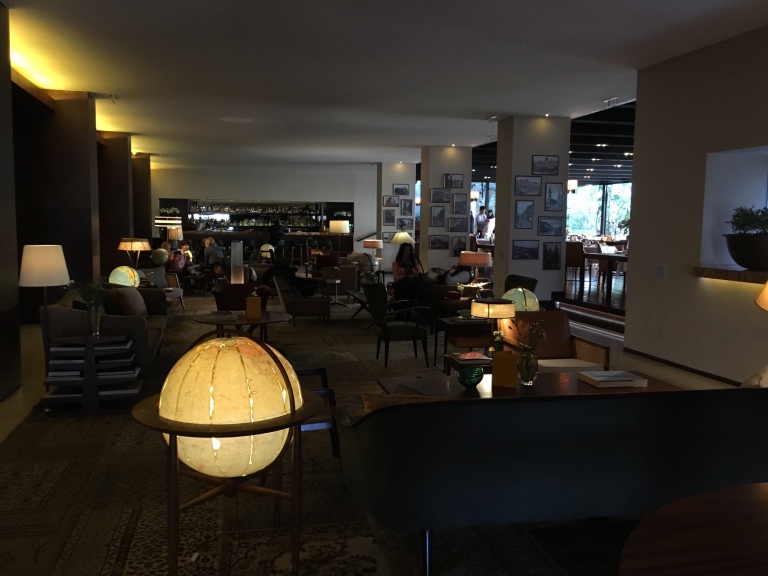 Excited to explore this up-and-comer, we woke early and headed out to cafe Cynepmarket for breakfast and to map out our day. Walking to the cafe through the pedestrian street felt like a ghost town. It was 9am on a Monday and minimal signs of life on the street. Where is everyone? We entered the cafe and nearly every table was full with espresso sippers and…smokers. Breakfast of champions, Belgrade. Why isn’t anyone at work? It was becoming clear that smoky atmospheres were unavoidable, so we sat down and ordered up French toast served with Feta, prosciutto and a local roasted pepper and eggplant relish that would quickly become a favorite, Ajvar. Yes! Serbians know how to do breakfast very well. 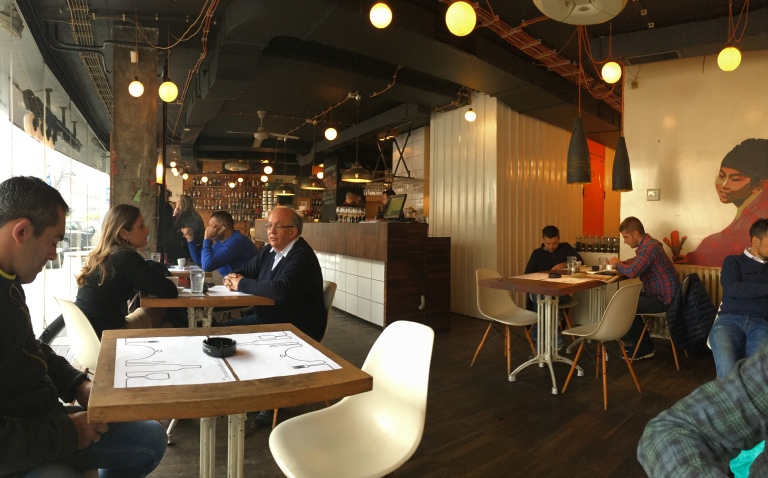 Our strong start to the morning was soon met with a day of misadventures. Nothing is incredibly close in Belgrade, and while there seems to be a sufficient tram system, we can’t read their alphabet so opted instead to take a taxi to our first destination, the White Palace. We had been warned by a Serbian friend that taxi drivers rip both tourists and locals off, so it was important to take a particular cab company and always make sure the meter is running. Our taxi driver didn’t speak English so we pointed to the address on google maps, which he couldn’t read because it was in English. After a few attempts to zero in on our desired destination he gave a nod and started to drive, with us in the back hoping for the best. When we pulled up to what looked like the Palace, all we saw was a security guard at the gate and no evidence of an entrance to tour. Were we in the right place? Sarah got out and asked the guard where we enter to visit the Palace and he responded that it’s only open to the public from April to October. An unfortunate downside to traveling in the off-season, and minor detail we missed on the website.

With that destination crossed out, we decided to head to the Church of Saint Sava, the largest Orthodox Church in the world and one of the largest churches in general. Seemed worthy of a visit. “Saint Sava” we said, but that did not compute. “Sava?” Still no. We showed him the name and address on google maps, but again the English version of the address was not understood. After several attempts to gesture, explain Saint Sava and merge his Serbian google map with our English version, he finally recognized where we wanted to go and headed off in the right direction. We successfully made it to Saint Sava, paid our taxi driver and headed inside.

As we entered it looked like a construction zone with wires poking out of the ceiling and NOTHING on the bare interior cement walls. There were no pews, no paintings, no evidence of anything meaningful to see. Shit #2. Was the church being renovated? Had I planned our trip to Belgrade at the worst possible time? As we walked back out to the entrance we saw locals placing money in a donation box, lighting candles and placing them in long sand pits. Is this all there was to see? Sarah noticed a sign pointing to a crypt so we followed that down a tarp-lined hallway to a set of stairs that lead down below the main church. Alas, we struck gold…literally. The crypt was covered in elaborate gold leaf and painted vaulted ceilings — possibly a sneak peek at what may be finished upstairs in the future? 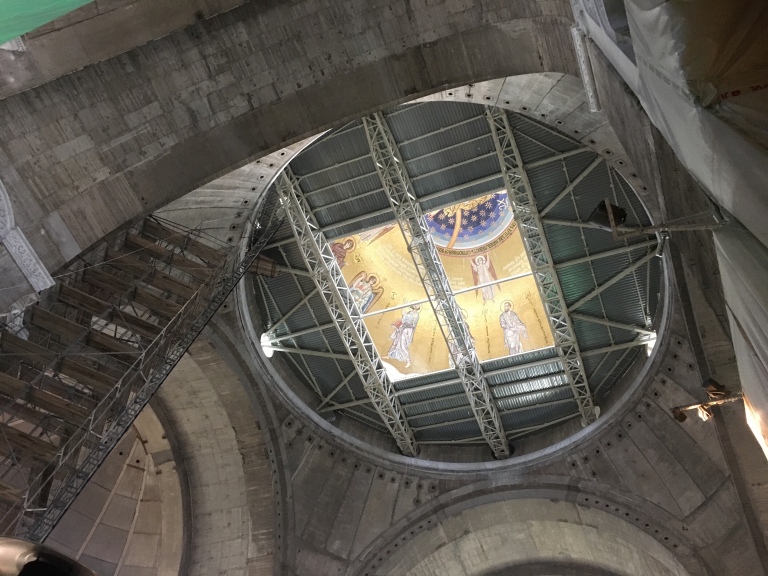 But what was the deal with the church? As we wandered around we finally found signs explaining the history of the church’s construction, which has been ongoing since 1895. Another symbol of Belgrade’s long and complicated past, the church was originally conceived 300 years after the burning of Saint Sava’s remains to begin in the early 1900s, but after a series of wars broke out all construction was placed on hold. The building began again in 1935, but again was paused during WWII when the German Nazis and then Red Army used it as a parking lot. It wasn’t until 1985 that construction resumed. And again halted after the bombing of Serbia in 1999. In 2001 construction resumed again with still a long way to go. One of the most interesting things we read is that the church was built entirely by people’s donations. We bought a candle to light and contributed our part to this history. We hadn’t come at the wrong time, this was just a very concrete symbol of how complicated Belgrade was and is.

Disappointed with our less than stellar morning, we decided to walk to the Design District that promised shops of up and coming designers to see what that had to offer. After about a 20 minute walk we headed down what looked like a charming street of shops, only to quickly learn most were closed on Mondays. We were 0 for 3.

Worn out by our failures we headed to one of the oldest hotels in Belgrade, Hotel Moskva, for a coffee (read: wine) break. Hotel Moskva has been around since 1908 with an iconic cafe serving a long list of pastries and a piano player who fills the room with music that takes you back to a time when poets and artists and ballerinas gathered here. It’s regal and old worldly and just what we needed at this point in the day.

We capped off our day of misfortunes with a delightful meal in a new part of town that is being built up along the river. The area feels a little bit Brooklyn with a string of outdoor cafes and hipster restaurants that overlook the Sava River. Ambar takes traditional Balkan dishes and gives them a makeover worthy of a New York Times review. Most entertaining is the option to get on the “Ambar Train” which bestows on you an unlimited number of tapas-sized dishes sent out by the Chef until you call mercy. We were exhausted, but got on the train anyway, taking bites of obsessive-worthy Kajmak cheese and endless varieties of meat. Even when we called mercy, our waiter shook his head and insisted we hadn’t tried all the best dishes yet and kept bringing us things he thought we NEEDED to try. And try we did. 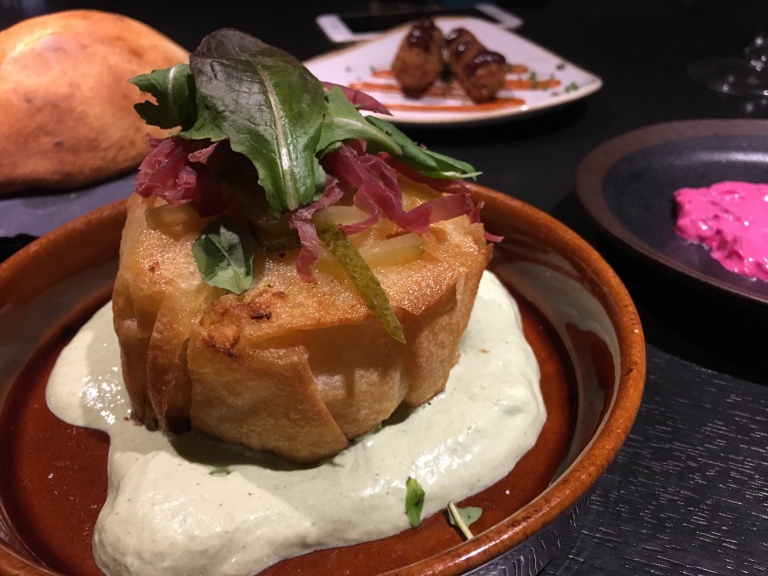 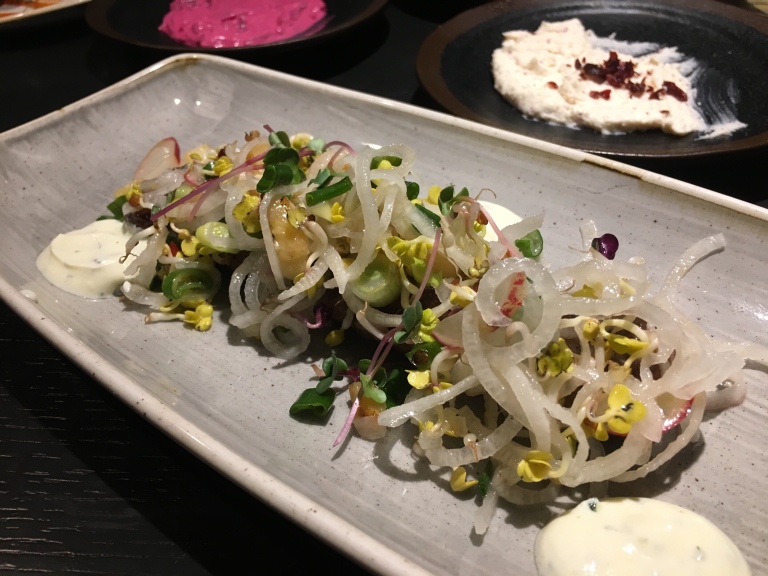 With the need to walk off our dinner we strolled back to the hotel through another pedestrian area that was alive with people, music, outdoor cafes, strings of bistro lights, shops and what seemed like endless nightlife. Belgrade comes alive at night. Everything looks and sounds different. This is why you come to Belgrade, for the night life.

We managed to be more successful the next day with a visit to the Museum of Yugoslavia (an homage to former Yugoslavian communist leader, Josip Broz Tito) and the Nikola Tesla Museum. Both are worthy stops if you find yourself in Belgrade looking to round out the nightlife with something educational, and if you want to attempt to try to unravel the complicated history of Serbia and its surrounding Slavic nations. I personally knew very little about this area of the world and came away a bit stunned by its evolution. 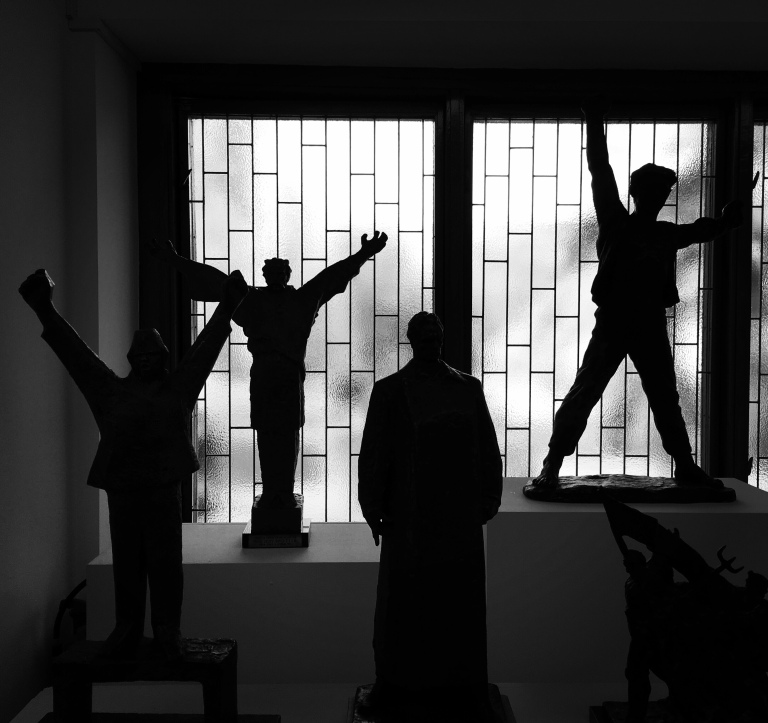 If you’re looking for kitschy Eastern European Belgrade and an authentic Serbian meal, then DEFINITELY stop in to Frans for lunch. A friend who lives in Serbia recommended it and did not lead us astray. It was packed with locals eating lunch at 3pm on a Tuesday, drinking wine and smoking their cigarettes. Starting to think no one works here. Also starting to think I need to adopt this leisurely breakfast and lunch habit, sans cigarettes. Don’t worry, you can request a seat in the non-smoking section and only mildly inhale second hand smoke while you enthusiastically inhale as much Kajmak cheese as you can handle. Be sure to visit the bathroom for a good laugh at the rose petal and fig leaf covered sink, double toilet stall, and bucket of free prosecco “for your pleasure.” Best Bathroom award goes to…Belgrade! 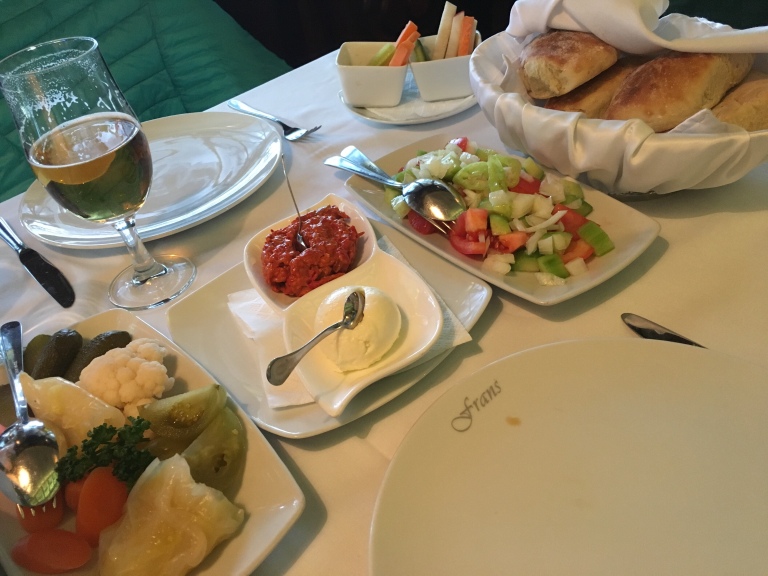 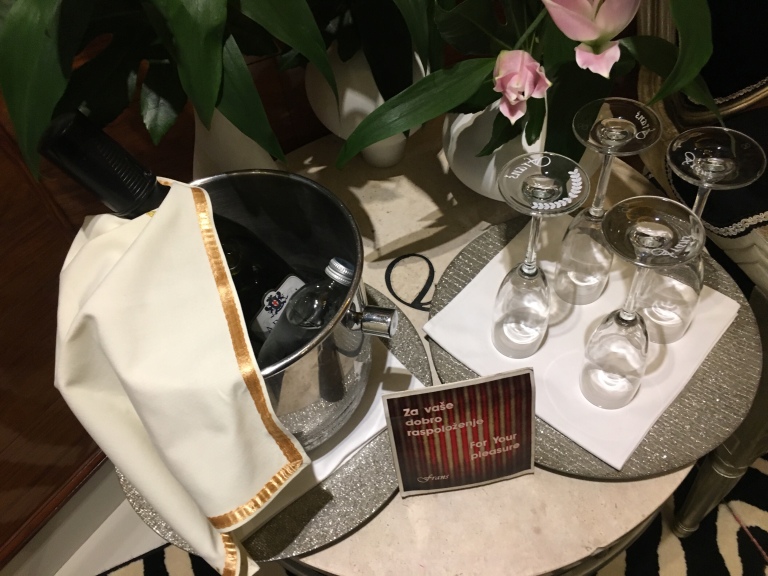 Belgrade is certainly up and coming. It hasn’t figured everything out yet, but who would when you’ve had an identity crisis for hundreds of years. You go to Belgrade because you don’t want to visit a city overrun with tourists where every shop is more likely to sell souvenirs than anything authentically local. You go because not everything is that easy to figure out and that’s why you travel in the first place, for adventure and the challenge outside of your norm. You go because you’re interested in learning about a part of the world that’s still evolving and very complicated. And when you tire of any complications you order up a glass of Serbian wine and a plate (or two) of kajmak.